Danish beauty Josephine Skriver has been paired up with photographer Nicole Heiniger to bring her undeniable presence and notable pout to ELLE Brazil’s January 2014 cover. The top model was photographed on location in Brooklyn on the colorful streets of Williamsburg. The location brought a very eclectic and vibrant feel to the photo shoot as Skriver posed in the red city night lights. Skriver rocked a smokey bold eye makeup paired with a nude lip and voluminous, wavy long locks that play with a very chic, ’60s-inspired look. Her makeup look was done by Jake Bailey and her hair by Marco Santini.

Stylist William Graper decorated Skriver in provocative midriff-bearing crop tops and playful colorful prints. The most notable piece in the shoot was undeniably the Heron Preston Bootleg “Nascar Factory Defect” shirt, featuring an array of company logos splashed onto a navy long sleeve. Christian Louboutin, Emilio Pucci, and Diesel were just a few of the big names featured in the photo shoot.

The model has been ranked as one of the top 50 models by Models.com, and she does not appear to be calling it quits anytime soon. She has so far strutted the runway for several big industry players, including Victoria’s Secret, Chanel, Giorgio Armani, and Valentino. Most recently, she has been featured in Urban Outfitter’s pre-Spring Lookbook for the New Year. The 20-year-old model has been signed with several different modeling agencies, including IMG Paris, The Society Management, and UNIQUE DENMARK. 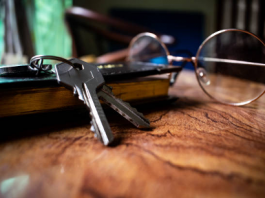